Pierre-Emerick Aubameyang admits he is still at a loss to explain Arsenal’s dismal performance in defeat against Liverpool last weekend and has warned his teammates that a repeat will almost certainly see their Europa League hopes dashed by Slavia Prague this evening.

The reigning champions cantered to a 3-0 win at the Emirates on Saturday against a wretched Arsenal who, without young tyros Bukayo Saka and Emile Smith Rowe, registered just two shots on target.

Manager Mikel Arteta branded the display ‘unacceptable’ and a string of pundits queued up to take aim at Arsenal’s attacking players in particular, with Gary Neville claiming Arsenal’s forward line resembled a ‘mafia’ and left him feeling uncomfortable.

Aubameyang had returned to something like his best form prior to the recent international break, but he cut a disconsolate figure against Liverpool and looked all at sea trying to help negate the attacking threat of Trent-Alexander Arnold.

The Gunners will look to get their season back on track this evening against dangerous opponents who have knocked out Leicester and Rangers in successive rounds and Aubameyang knows his team cannot afford to take the Czech Republic champions lightly. 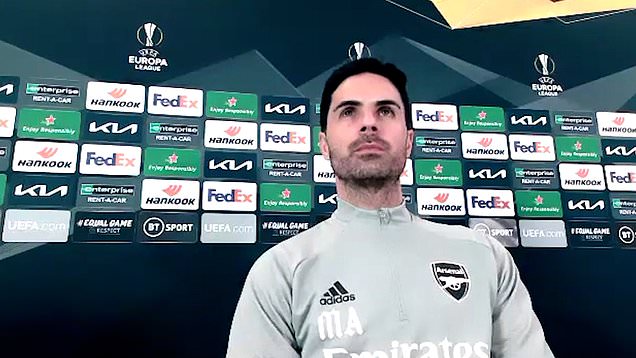 To view this video please enable JavaScript, and consider upgrading to a web
browser that
supports HTML5
video

‘We did not perform anywhere near how we can on Saturday against Liverpool,’ the Gabon international wrote in his programme notes. ‘We didn’t deserve to get anything and really it’s difficult to explain because we were confident going into it, that we could really get a result against them.

‘But we didn’t create enough, didn’t attack like we have been lately and we couldn’t cause them problems. So when that happens, a team with the quality of Liverpool will find a way to make you pay, and that’s what they did in the second half.

‘But as I said we have to learn from that and turn things around fast because tonight’s game in the Europa League is a big objective for us.

‘There’s no doubt how strong Slavia Prague are. They are really building a reputation in the last few years of a team that can go and beat anyone, and if they are in the last eight of the competition then they must be a dangerous side.

‘I know Slavia have been very strong this season, in Europe and in their league too, so for sure we are going to be facing a team that is very high on confidence. It’s up to us to make them feel like a losing team for once!

‘They have a very strong squad, I know there are some really good African players in the team as well that I know about, so we have no excuses – we will be ready for them and we will give everything to get through to the next round.’

For more stories like this, check our sport page.

My New on Point brings you DAILY NEWS updates from TOP NEWS BLOGS around the World.

Your News on the Go | Daily News Updates

In Ruling on Trump’s Ban, Facebook’s Oversight Board Has the Opportunity to Change the Platform’s Approach